To share your memory on the wall of Jackie \"Jack\" Mills, sign in using one of the following options:

Print
Jackie Ray Mills, 82, a resident of Lake Charles, passed from this life on January 4, 2021, in a local hospital. Jack was born on April 14, 1938, in Evansville, Indiana, to the union of Henry Edward Mills, Jr. and Vivian Ethel LaRoe.

â€śJack,â€ť as he was known by all, was a loving husband and father. Mr. Mills attended Bosse High School and graduated in 1955. He attended San Fernando Valley Junior College and graduated with a degree in Engineering. Mr. Mills worked for ITT General Controls in Glendale, CA. He became a precision machinist and worked his way up to tool and operations planner. While in Glendale, he co-organized the rifle and pistol club and co-founded and chaired the San Fernando Valley Chapter of the Society of Carbide and Tool Engineers. Jack later went to work for Boeing Airplane Company as a tool and operations planner for the first 747 passenger plane and later worked for Lockheed and Northrop, where he served as manufacturing manager of F-18 fighter jets. Jack retired from Northrop as a Manufacturing Engineer after 21 years of dedicated service. He was a private pilot, loved Harley Davidson Sportswear and singing in barbershop quartets.

Mr. Mills is preceded in death by his parents and one brother Robert Mills.

Services for Mr. Mills will be private, and burial will be held at Consolata Cemetery.

Memories and words of comfort may be shared with the family at www.lakesidefh.com.
Read Less

We encourage you to share your most beloved memories of Jackie "Jack" here, so that the family and other loved ones can always see it. You can upload cherished photographs, or share your favorite stories, and can even comment on those shared by others.

Plant a Tree in Memory of Jackie "Jack"
Plant a tree 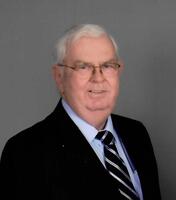